In a firmament of our community’s shining stars, Carol Jenkins Barnett was certainly one of the brightest. Giving generously of her time, talent, and treasure was as second nature to Carol as it was to her mentor and father, Publix Founder George W. Jenkins. Carol learned the act of volunteering from her mother, Anne MacGregor Jenkins, to whom our building’s Lake Morton Parlor is dedicated. A League volunteer herself, Anne stood on ladders, decorating for a league event, while she was pregnant with Carol. Hence there is little wonder that Carol was one of our most devoted Members, with voluntarism and philanthropy running in equal measure through her veins. 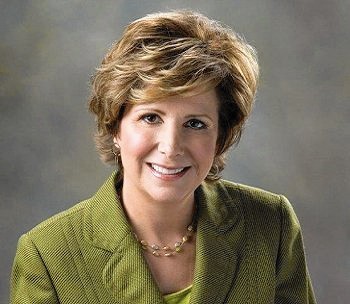 Throughout years of League service, Carol wore many important hats. During her active years, Carol served as Nominating Chairman, Admissions/ Provisional Chairman, Special Projects Task Force Chairman, Treasurer, and Community Vice President. But one of her most important roles, and certainly one of her favorites, was being what she referred to as “The Mother of Follies” when she reintroduced that highly successful corporate fundraiser to our membership in 1984. Carol als

o took on the critical role of being Follies Backers Chairman for several of our League follies, and she saw to it that Publix served as a principal backer. Additionally, Carol and her husband Barney always enjoyed performing on stage in these fun community events. Subsequently, Publix also restored the marquee for the Polk Theatre which housed our follies events.

Carol served on the Junior League’s Community Think Tank, a group she once chaired as Community Vice President. To Carol, her husband Barney, and her sons Wesley and Nicholas who, coincidentally, are each married to their very own Ashley, we tender our most sincere thanks for sharing this most remarkable woman and loving friend with us throughout the years.

Beyond the League, Carol was honored in many ways for her philanthropic spirit. Carol had the honor of being inducted into the Florida Women’s Hall of Fame. In 2004, she won the Florida Arts Recognition Award for her dedication to the arts in Florida. As a tireless worker for the United Way and as the long-time president of Publix Super Market Charities, Carol’s reach has been widely felt. To that end, Carol was the recipient of the 2015 Women in Philanthropy award, a national honor bestowed by the United Way Women’s Leadership Council. The Lakeland Area Chamber of Commerce honored Carol, a graduate of Leadership Lakeland, with the Jerry Annis Award for service. A Florida Southern College alumni, Carol and her fellow alumni and husband Barney have given generously to that campus with buildings bearing the names of their family members and their company. The city of Lakeland has been a beneficiary of the family’s generosity with their sponsorship of the beautiful Barnett Family Park. While Lakeland Regional Health’s eight-story, 300,000 square-foot new wing, slated to open in 2018, will proudly bear Carol’s own name when it opens: The Carol Jenkins Barnett Pavilion for Women and Children.

Additionally, 40 families throughout the states served by Publix will have decent housing as well as increased support to more than 60 Habitat for Humanity affiliates with the multi-million dollar grant that Carol and Barney made to Habitat. In Polk County, our community’s frail seniors served by VISTE benefit from their generosity as well.

Above and beyond the spotlight that shined so brightly on her various endeavors, Carol was the real deal, a real friend. Money and power never went to her head: she was kind and encouraging, loving and loyal, dependable and true. And whether in friendship or philanthropy, Carol was the embodiment of the principle of Noblesse Oblige: to whom much is given, much is expected. That was a principle Carol has faithfully adhered to all of her life, and she learned firsthand that, “A life of giving is a life worth living.”